A few years ago, I blogged, asking for the secret password to get past Tier 0-level customer service “technicians”.  In fact, I’d even really forgotten about posting this request until I was revamping the site for my current return after a year+ hiatus.

Randall Munroe over at xkcd, as usual, read my mind:

Oh, and if you don’t understand the shibboleth reference, watch this clip from my favorite TV show, The West Wing (sorry, couldn’t embed).

I monitor/read about 100 blogs. Many are either technology or law-related – and these days, entire blogs consist of posting links to other posts on other interesting blogs. Of course, RSS has made this almost too easy – firing up one application that systematically checks them all for new posts. And, as one would expect, there are several posts that I see on a regular basis that “make” the rounds of a particular type of blog (for example, the Apple iPhone announcements are always seen on a dozen or more blogs, after each individual whisper from Cupertino).

I figured that most, if not all, would include some form of April Fool’s joke. Us geeks tend to like creative humor. A silly comment, a made up something-or-other.

What I didn’t guess is that several of them would report Google’s AF joke as a post on their own site. At least 6 have now commented on TiSP. Why?

Another 2 have commented on Crunchgear. Again, why? Do you think that we only read your blog to the exclusion of all of the others? Were RSS not available, I suppose that might happen. But really.

To Google and Crunchgear, good show. To the others – well, um, ah….

When people don’t understand what I’m trying to tell them in a negotiation, I often resort to the use of an analogy. The idea is that if I can’t gain understanding on the actual words, let’s shoot for understanding on the concepts. Once we get to that point, we’ll go back to the language and work out the details.

These types of comparisons can become quite difficult and quite involved, especially when you’re dealing with discussions on technologies that are new or not fully realized yet. But yesterday, I realized that comparisons, even at a very fundamental level, can be just as sticky.

Guy Kawasaki, the original Mac Evangelist, has become an incredible business person. He’s well known, well respected, and like many others, writes a blog where he usually discusses various business topics. The other day, he linked to the TED conference presentations that are available for online viewing. Admitedly, these are some of the world’s brightest people talking about many of the world’s most pressing problems.

Guy’s post, however, was specifically about one of the presenters, whom he compared to Steve Jobs in terms of presentation abilities. Now, I don’t know Steve. Guy, however, does. Personally. So, when I read that headline and the article, I went back to the TED page to view this presenter (whom I hadn’t gotten to quite yet), because Steve’s pretty good.

And to be fair, I was impressed by her passion and said so in a comment on Guy’s blog – but her presentation style left much to be desired. The other commentors also were split about how they felt. Some had similar feelings as I did, some agreed with Guy. I finally realized the danger of comparison (and was reminded of the danger of having serious conversations in an online format) while reading the comments again this morning to see what had been posted overnight.

One person, Splashman, stated: “I must again point out that Guy’s comparison of Majora to Steve is unqualified. That means he didn’t say, “Majora is better in a couple of areas.” He didn’t say, “Majora would be better than Steve if she had the same support and 20 years’ practice.” The title of his post is “As good as Steve Jobs.” And nothing in the body of the post gives the impression that he is qualifying the comparison.”

So, it wasn’t so much that the comparison was made, but the weight given to the comparison by the original author as well as by the reader of the comparison. Had it been me making the comparison, would readers have reacted in the same way? I don’t think so. Since I don’t know Steve. Since I wasn’t at TED. Since I’m not Guy.

I personally went to listen to the presentation because Guy said it was good. In my opinion, it wasn’t, regardless of whether the topic was relevant, important and the speaker was passionate. My opinion of Guy’s opinion won’t be tarnished because of this difference. But I can see where it could happen that some people would decrease the level of credence they give to Guy based on this difference.

The lesson here is that while analogies or other comparisons are good, negative weighted opinions can block understanding at best, and at worst, sway things in an opposite direction than what was desired. I gave Guy’s opinion the benefit of the doubt I had about the presenter because I trusted his opinion. The fact that I now disagree with his opinion could have caused me to discount other opinions he holds or shares. If this was a negotiation, this becomes a trust issue – which is never a good problem to have.

So I’ll continue to read Guy’s blog. If for no other reason than the fact that my respect for Guy isn’t based on his opinions, it’s based on his actions… and the fact that someone says something that I personally disagree with doesn’t mean that I discount their opinion (even if I think it’s wrong

“Today, we celebrate the first glorious anniversary of the Information Purification Directives. We have created, for the first time in all history, a garden of pure ideology. Where each worker may bloom, secure from the pests purveying contradictory thoughts. Our Unification of Thought is more powerful a weapon than any fleet or army on earth. We are one people. With one will, one resolve, one cause. Our enemies shall talk themselves to death and we will bury them with their own confusion. We shall prevail!”

So I’ve moved my domain to just be a blog. About time, I know. And to mark the occasion, I’m going to try to attach a photo for the first time, too. 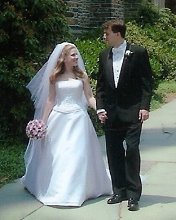